My drawing "In Shadow/Felix" will be on display at the Salmagundi Club (http://www.salmagundi.org/index.cfm) as part of the annual non-members group exhibition. The Exhibition runs from July 31st to August 11th. The closing reception will be on Friday, August 11th (7-9pm). Congrats to all the artists who were accepted into the exhibition. 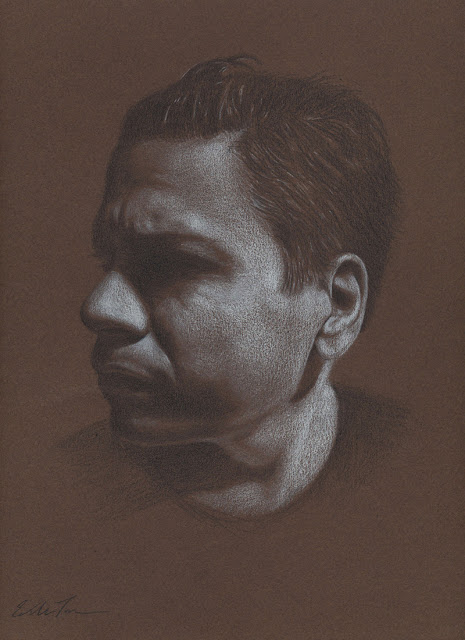 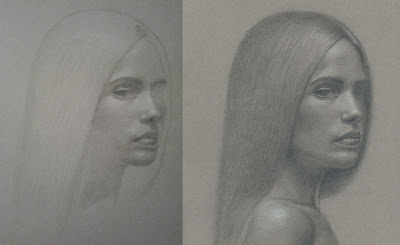 In keeping up with trying to be frequent with my blog posts, here is another short process on my drawing of my friend Charlene. I began with the basic block-in and refining my line until the drawing resembles the model. Once the line work is done, i began shading in with both light and dark tones at the same time. The first photo was taken with my cell phone (left) and the second image (right) was scanned which is why the quality looks different. The drawing was done on Canson Mi-Tienes pastel paper using graphite for the darks and white pastels for the lights. 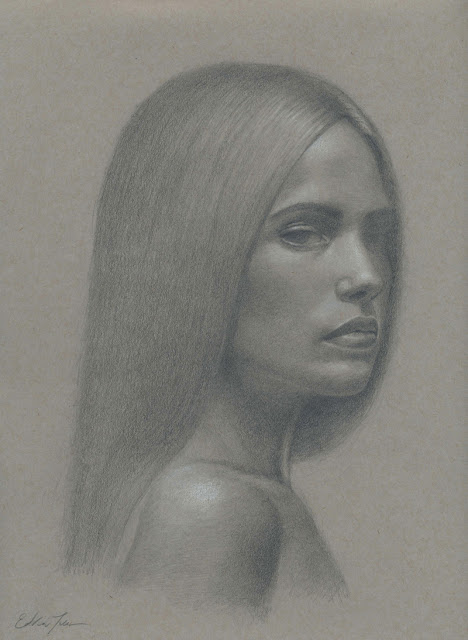 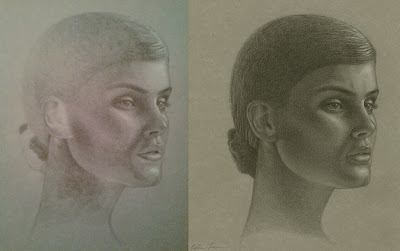 It's been a while since my last blog update. Geez, a year! Looks like i slacked off a bit so time to get back on track. Good? Good. This is a quick rundown of how i put this piece together. I used Canson Mi Tienes Pastel Paper. With paper, for me, it boils down to preference and effect. I like the texture of this brand of pastel paper. It has well balanced tooth on the smooth side of the paper but also has a heavier tooth on the opposite side. I prefer drawing in the pad as opposed to cutting down large single sheets due to the fact that sheets are sold with labels glued to them which leaves a sticky residue when you peal them off.
This was drawn using soft graphite and white pastel pencils. I started off with the line drawing. Shading does'nt start until the line drawing is as close to accurate as i can make it. Both light and dark tones were done at the same time. Traditionally, this is a no-no but...rules were made to be broken in Eddie World. lol. It's easier for me to balance the light and shadow working both tones at the same time. Normally i don't work this way but i used this method for this piece.
Click on the image for detail. The first image was taken with a cell phone and the second image was scanned which is why the resolution seems different. 'Til next time, peepz! 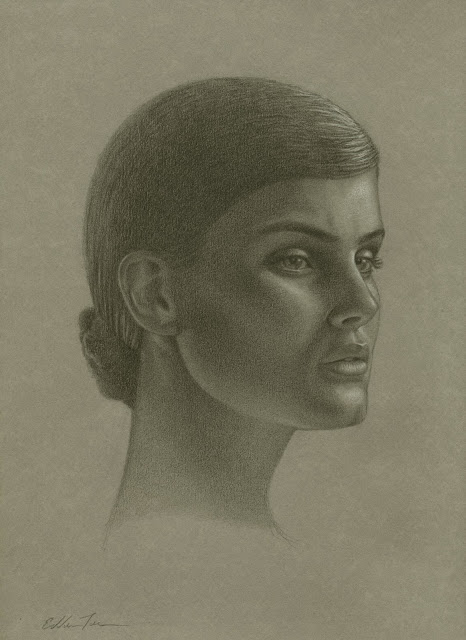 Painted in photoshop. This was supposed to be a sketch but ended up more refined than i thought. Couldn't help myself once the rhythm was on and the juices started flowin'.
I tested her with bangs and having only one sword. I liked how it worked but the free-flowing hair made sense to me. 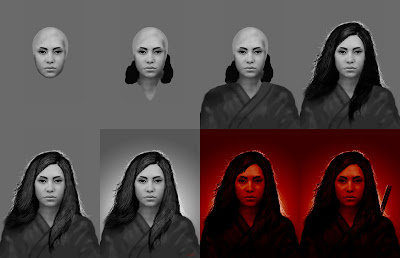 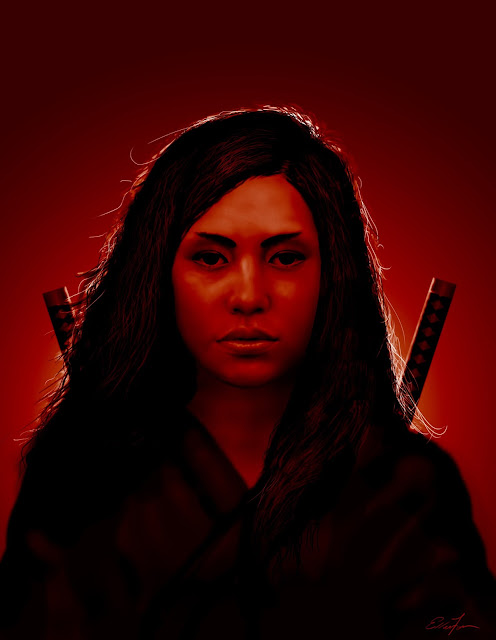 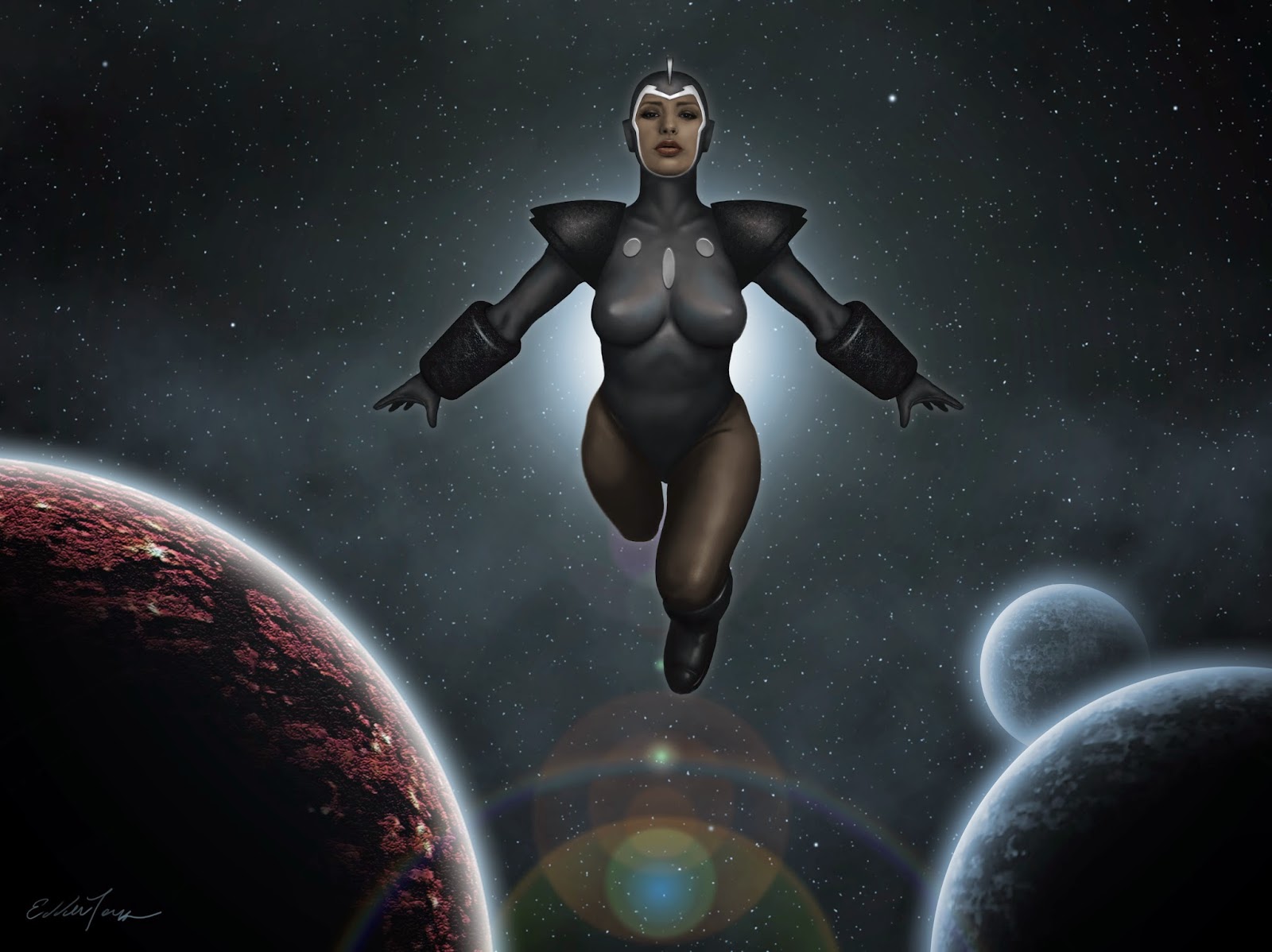 This is a commissioned piece based off of artist Scott Williams' character who will be featured in Witch Hunter #20 by Monarch Comics. This piece will be the back cover. Painted in photoshop.
Posted by Ed-Art at 8:39 AM 1 comment:

This is progression/step by step process of a couple pieces i painted for the comic book series "Witch Hunter" by Monarch Comics, as well as a sketch of The Woman in Black and some prelims. 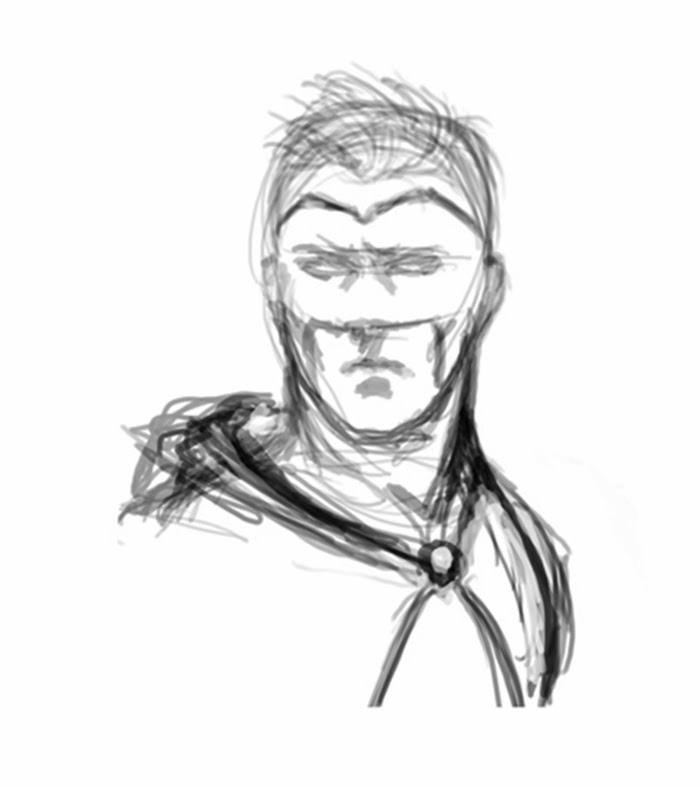 Here is an early quick sketch of Witch Hunter painted in photoshop. 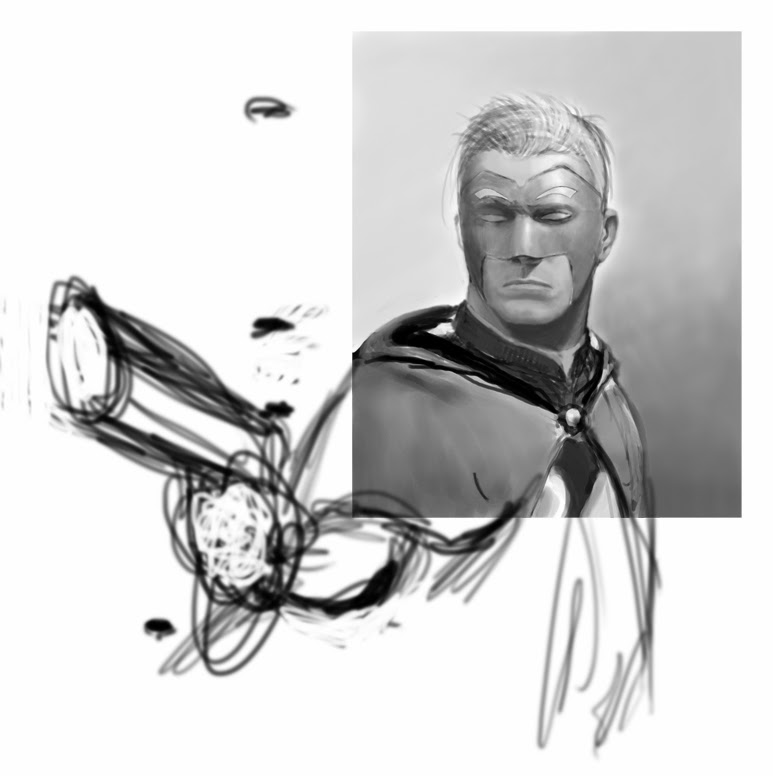 I decided to expand the image and turn it more into an action pose instead of a head portrait. Using the crop tool. i increased the size and sketched in the torso and arm. 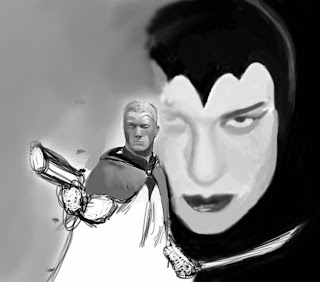 Still not satisfied with the piece, i felt that more of a story could be told by adding The Woman in Black's face to the background. Being one of Witch Hunter's nemesis', it made sense to add her. Here is where things changed. Although i was happy with the idea of The Woman in Black, her head pose seemed to be distracting my eyes away from the main character, so i decided to scrap that idea and paint in a new face (explained in part 2). 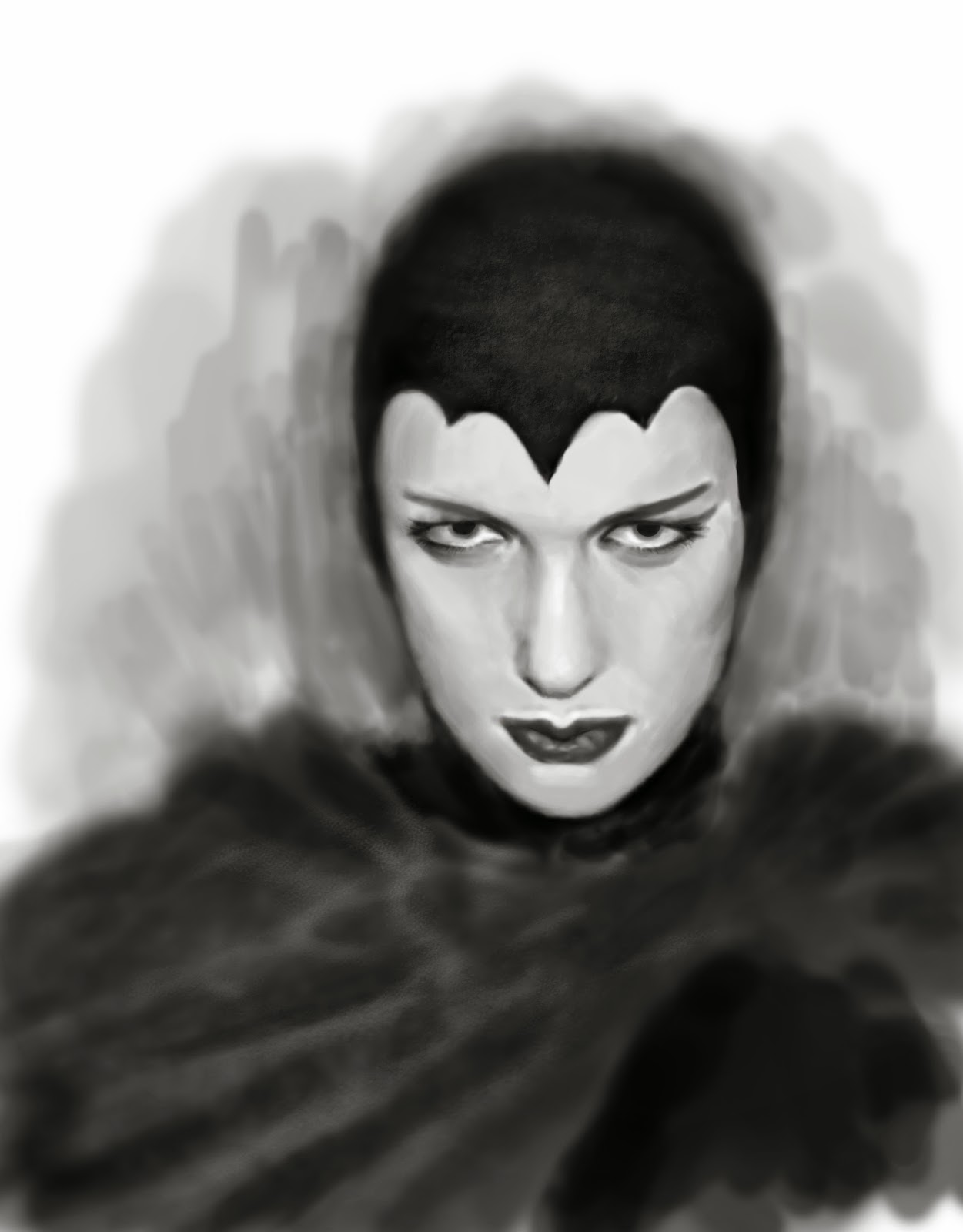 I didn't want to fully scrap The Woman in Black so i decided to give her a standalone image. I used a soft round brush for the overall image and a textured brush for her clothing. 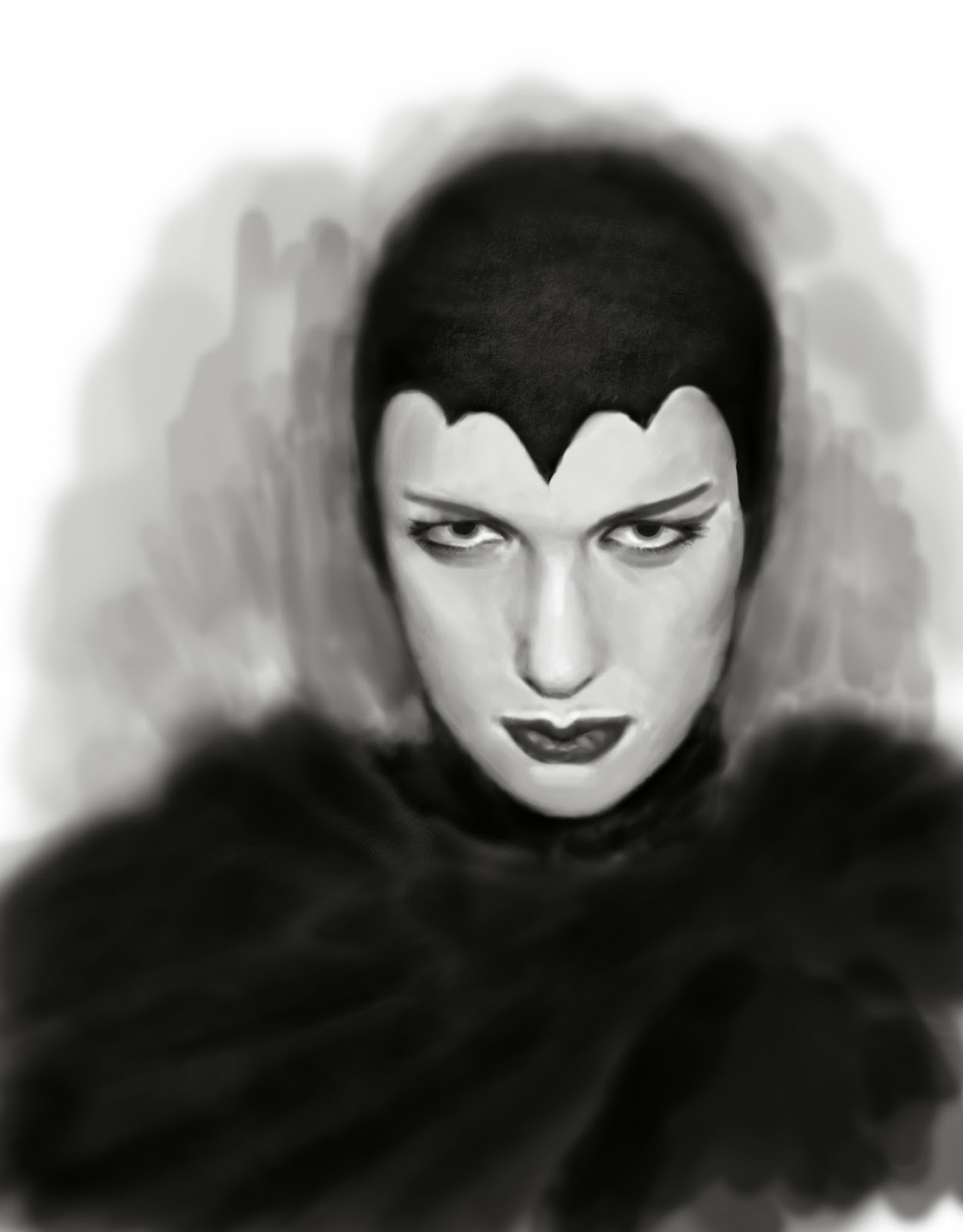 A little darkening to keep the focus on her face. A few touch-ups and some texture added. And she is finished. 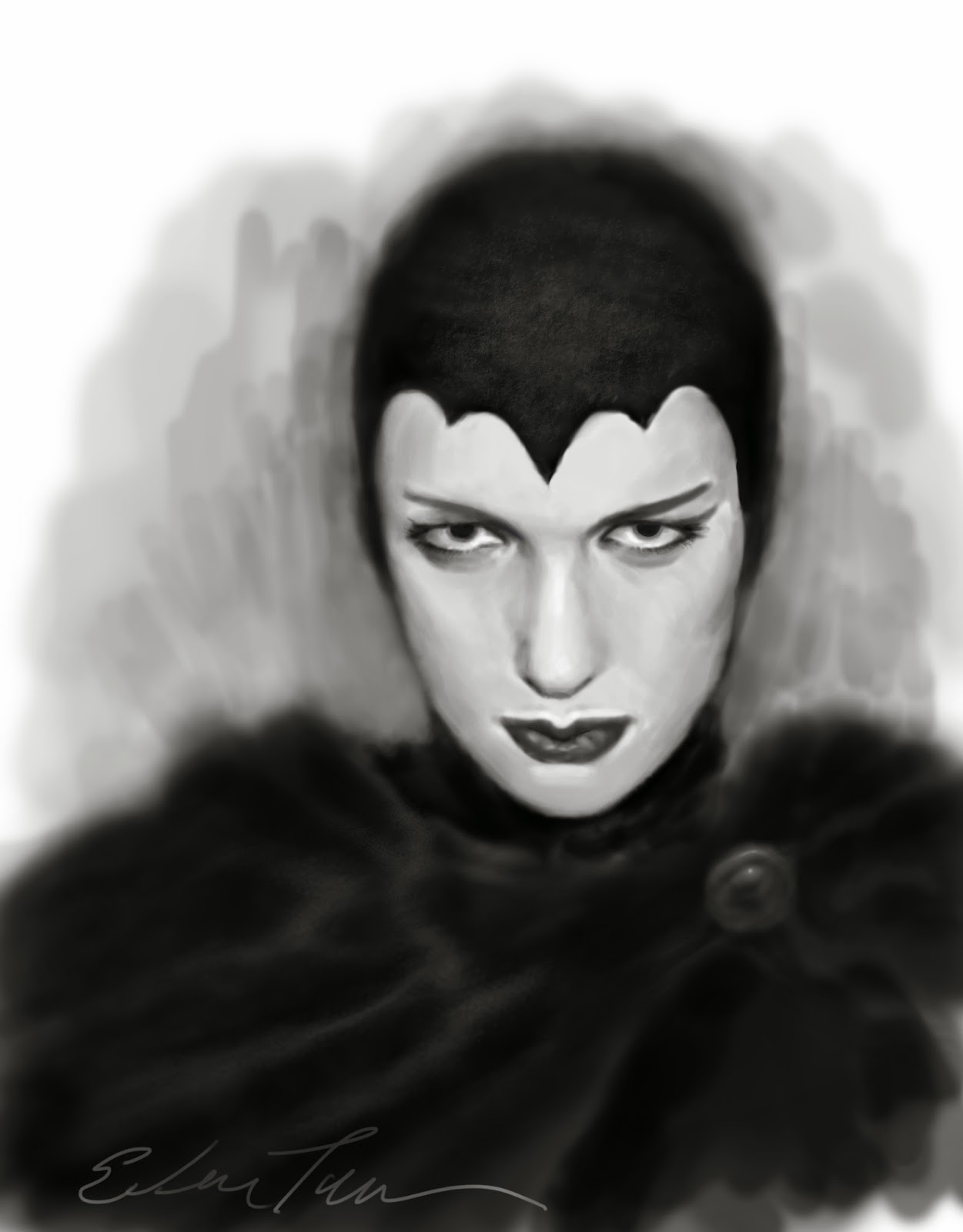 The Woman in Black sketch
painted in photoshop
My sketch for the upcoming Monarch Comics Chronicles horror magazine on Halloween.
You can see more of The Woman in Black at the www.monarchcomics.comwebsite and on their facebook page: https://www.facebook.com/monarch.comics
Posted by Ed-Art at 3:49 PM 2 comments: